ExactTarget goes to the stock market

ExactTarget, one of the larger players in email marketing is preparing to bring the company onto the Stock Market. As it has filed their S-1 for an IPO (initial public offering) to raise as much as $100 million. This means that we can have a look into ExactTarget’s numbers for this and last year. The IPO info didn’t offer any big surprises.

In 2007 the company filed for an earlier IPO of up to $86.25 million. It later withdrew the offering in May 2009 citing “continued weakness and uncertainty in the equity and credit markets,” meaning the financial crisis.

ExactTarget as one of the larger SaaS companies has seen impressive growth for the last 43 consecutive months. The move to the stock market is in line with the trend of other email service providers and SaaS suppliers going public.

There’s a reason for this loss. “ExactTarget has been investing. Mainly on innovation, building market share and expanding overseas,” according to Indianapolix Business Journal. ExactTarget has made three acquisitions in the last two years: mPath, cotweet and Keymail marketing. It also added 500 employees and launched their email marketing operations in the UK and Australia. 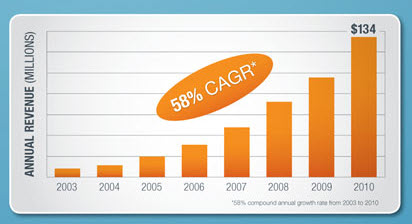 Some interesting statistics as seen in the ExactTarget IPO

A direct client base of over 4,600 organizations

Those are some impressive numbers. ExactTarget adds that its revenue is distributed across clients ranging from enterprises to small businesses in numerous industries, including retail and ecommerce, media and entertainment, travel and hospitality, financial services and insurance, technology, daily-deal and flash-sale and marketing service providers. Where no client represented more than 5% of revenue.

It’s quite interesting that it named daily deal sites seperately, as those have been seeing huge growth in the last year. Groupon had its own IPO as the flagship of the daily deals companies, but received some heavy comments as to their (inflated and sustainable) worth.