The announcement follows the launch of “digital marketing tools in one place” last year with Shopify Marketing. Shopify Email is built using the marketing app extension, and is one of many marketing apps available within Shopify. By opening up the Shopify APIs, third-party marketing apps have also integrated into Shopify to allow a variety of marketing campaign extentions.

With customizable email templates, existing brand assets, and product content from their store, promising to make putting together marketing campaigns easy. You will be able to send marketing emails using your domain name.

Shopify Email includes email campaign analytics including email open and click-through rates, plus the number of products added to carts and purchased. 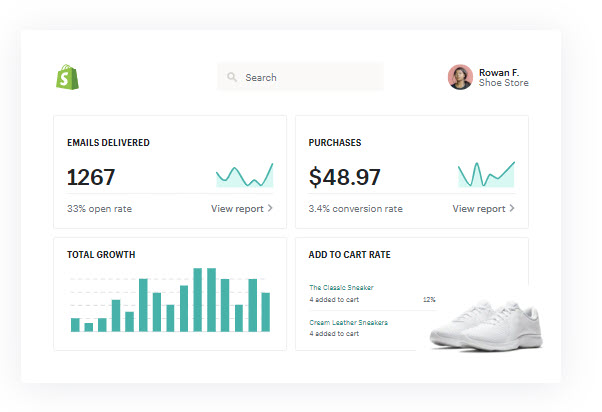 From what we have seen so far, the functionality is still quite basic and geared towards shops that are starting out with email marketing. Yet, this announcement must come as a blow in the face of popular third-party email marketing related apps.

My expectation? That article is going to be updated soon.

So what does Shopify Email cost? According to the product manager Jacinthe Ricard of Shopify: “Shopify Email is free to use for a limited time. And in the future, low-cost plans will be available to all Shopify stores.” No news yet on what limited time or low-cost means, but probably the free use is during early access and rollout.

What’s MailChimp got to do with it?

You might remember that Shopify had a quite big fall-out with MailChimp earlier removing the integration. So may it be chicken or the egg, what happened here might be a (re)action of that falling out? If you know anything more about it, do place a comment.

Shopify Email is still in beta and only available to select merchants, who can apply for early access. It is announced to roll out widely early 2020.