Email service provider ExpertSender recently added a new feature that allows their users to know whether the results of their split tests are statistically significant. Marketers now get a graphical representation of their results and can make informed decisions on their split testing outcomes directly from the email provider’s interface. 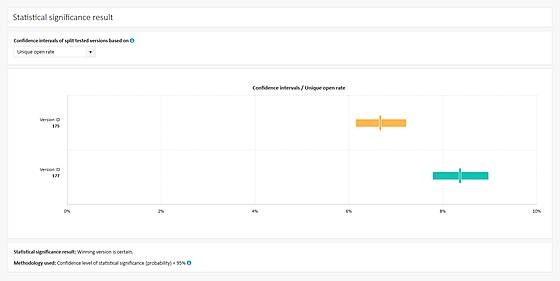 ExpertSender decided to combat one of the inherent weaknesses of split testing: split test results can lead you into making erroneous decisions. Having the appropriate confidence levels (both statistically and in your own assumptions) allows you to make better-informed business decisions.

Are Your Split Tests Statistically Significant?

Have you ever wondered whether the split tests that you are performing on your emails are statistically significant (in simple terms: if the test result really did mean something or if you happened to run it again you might just have had a completely different result)?

For example, a split test result on a subject line generating a 22% open rate might look like a clear winner compared to 20% generated by another, but can you tell whether this difference wasn’t just the result of chance?

After running split tests (ExpertSender allows for up to 5 different versions) users are presented with a few different suggestions based on the results of the test group’s size, versions and variables that were tested. These suggestions allow the user to make actionable changes for future split tests.

Some of the possible suggestions a user may receive;

In the following example, there are three different test groups with different subject lines and each of them has a different Unique Open Rates, 6.67%, 6.20% and 8.36% respectively. The final test group seems to be the obvious winner, but are you able to conclude whether it was statistically significant? 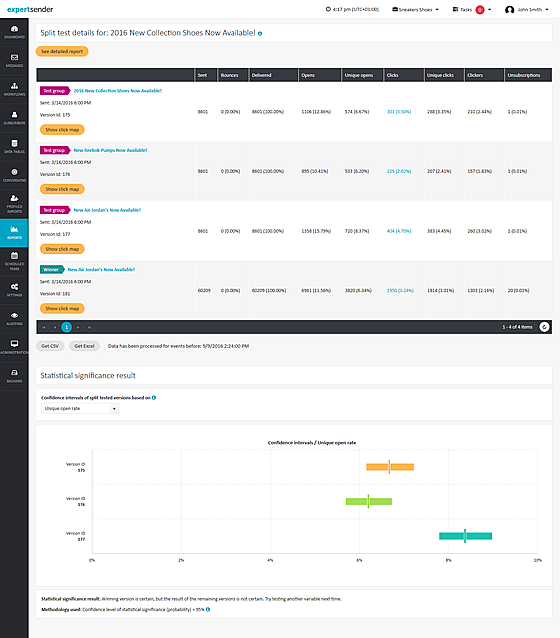 The Statistical significance result confirms that the third version was a certain winner, but there is no certainty in our remaining versions.

The statistical significance analysis is available to all ExpertSender users as of the latest release.