The previous version of MailerQ allowed users to send up to 600.000 emails an hour. The new 1.0 release has an enterprise edition that doesn’t set limits on the number of messages that can be send per hour.

MailerQ is the first MTA that uses RabbitMQ, an AMQP message queue as its outbox. MailerQ loads JSON encoded messages from the RabbitMQ message queue, sends them out over an SMTP connection, and then publishes the JSON encoded result back to one or more result queues, where other programs or scripts can pick them up. 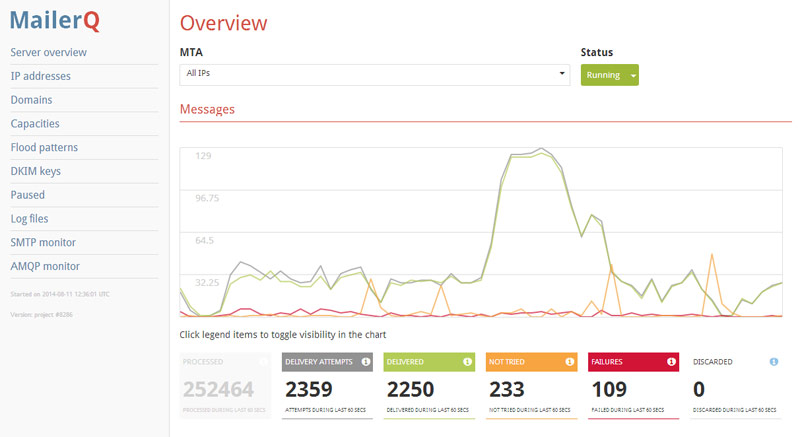 By using RabbitM, users are able to set filters, monitor emails and adjust priorities real-time. Databases, such as Couchbase and MongoDB are used to store the content of messages before they are placed in RabbitMQ, reducing the amount of data that has to be pushed back and forth in RabbitMQ message queues and increasing efficiency.

MailerQ then retrieves the content when an SMTP connection has been established, the message will then retrieve its content from the database. RabbitMQ can be controlled through JSON, allowing the user to integrate it into an existing application.

Key features of the MailerQ MTA

To control delivery MailerQ users can set additional properties, such as the number of send attempts, the maximum delivery time and ’email throttling’. This last property allows the user to limited the amount of email messages and the send-speed to certain ISPs, to stop them from blocking your messages. This limit can be set for the entire domain, per IP address, per active SMTP connection and MailerQ memory.

It is also possible to add flood patterns in MailerQ. With flood patterns users can tell MailerQ to react automatically to specific server responses and overrule default email throttle settings to make sure emails are delivered.

The management console of MailerQ allows the user to check the performance of individual IP addresses and domains. This includes live information on failed deliveries and queue status, users can adjust settings as emails are being sent to increase deliverability.